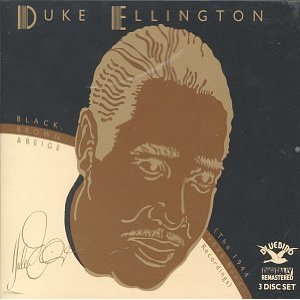 Read the introduction and see the full album list here.

A compilation is a hard thing to wrote about. There isn’t much personality to a compilation; not the kind of personality that comes with an album as it was released – the original liner notes, cover art, and programming.

This essay project is all about the personality that records have. But the fact is that at least three of my first jazz albums were compilations, so I guess I have to find something in here, somewhere.

The Duke compilation the hardest of the three to write about. That’s because I formed an impression of what Duke Ellington’s music was supposed to sound like – from hearing Thelonious Monk’s Plays Duke Ellington, or from Mingus – and then encountered what the music actually sounds like, and have never quite reconciled the two. The abbreviated version of Duke Ellington is that his new approach to harmony and composition, and his commitment to the African-Americanness of an art form whose origins were often, in the 1930s and 1940s, debated, ushered in decades of explorative and socially conscious jazz musicians.

The summary isn’t so bad. And it’s borne out in a lot of the music – from the early records in the Cotton Club years to Black, Brown And Beige with Mahalia Jackson or ”Isfahan.”

But in between those bookends of Ellington’s music – the vibrant early years, the explorative later ones – there are several discs worth of what where, in the 1940s, pop tunes. These tunes were Ellington’s entry in the popular music of the time, and he shared the arena not with Monk or Mingus, but with Woody Herman, Tommy Dorsey, Artie Shaw, Benny Goodman, Count Basie and even Glenn Miller.

This is the music on Black, Brown & Beige.

Some of this music is timelessly Duke. ”Otto (Make That Riff Staccato)” is one of my favorite Ellington tunes. It features all the hallmark Duke elements – from the muted trumpet to the dense ensemble work and the driving rhythm section – plus lyrics that are, for once, listenable.

Has any jazz composer been so -badly served so often by lyrics? Point to ”Lush Life” all you like – for every worthwhile set of words set to Duke’s music, there are ten more that’ll make you wince. It weakens – or at least hides – much of Ellington’s best work from the ’40s, which is too bad.

In the end, Black, Brown & Beige is an interesting set that features much of what be called ”the greatest hits,” but also pushes to the foreground several worthwhile pieces that might be overshadowed by the more Monkian or Mingusy aspects of Duke – like ”Long, Strong & Consecutive,” or ”Every Hour On The Hour (I Fall In Love With You.”

It may not have much personality as a record, but it serves Duke’s own very well.