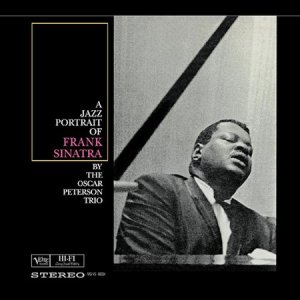 Read the introduction and see the full album list here.

Two weeks ago at Nextbop, I wrote about the nuances of the tribute album and praised Wynton Marsalis’s Marsalis Plays Monk as a masterful handling of those nuances.

A Jazz Portrait Of Frank Sinatra, recorded by the Oscar Peterson trio in 1959, is a record with a more difficult goal in mind, and unfortunately it falls far short of the mark, mainly because of the same nuances Marsalis navigated so well with his Monk record.

There are two obvious reasons why A Jazz Portrait Of Frank Sinatra might fail; surprisingly, neither is. The first is the concept itself. While it’s relatively easy for a vocalist to pay tribute to an instrumentalist (think Jon Hendricks) it’s much harder to go in the opposite direction, especially when that vocalist is Frank Sinatra, one of the most instantly recognizable voices in all of music. The second is the running time of the record. The whole thing clocks in at slightly more than half an hour, pretty measly even for the LP era.

Why is neither one the death of A Jazz Portrait? Well, the concept actually fits Peterson pretty well. Like Sinatra, the pianist liked to be well supported but wasn’t completely comfortable letting his support into the spotlight, and both favored tightly arranged tunes that they could bend to their will. And Peterson was an able vocalist himself, as he demonstrated in 1965 with his much more successful tribute record for Nat King Cole.

But there’s a distance between the material – a competent summary of Sinatra’s biggest hits at the time – and the trio. Peterson was a kind and creative man, and I can’t really see him phoning anything in – he was too earnest for that. But this comes as close as anything could; solo space for Ray Brown and Ed Thigpen (meagre at the best of times – I always chafe at the thought that the masterful Thigpen put in his peak years getting eight bars a record of solo space with Peterson) is cut to nearly nothing, and Peterson himself breezes through anonymously arranged melodies, puts in his chorus of improvisation, and closes it out. Everything is at a high level technically, but there isn’t much here musically.

It’s puzzling that no effort was made to replicate Nelson Riddle’s original Sinatra arrangements – the ones here barely deserve to be called such, and were probably worked out in the studio right before the red light turned on. Most tunes are taken at an easy, medium-up swing tempo, a tempo one clarinetist I played with refused to play – ”because you’ll never leave it.” The repetition of ideas is all a bit numbing.

Marsalis was able to use his Monk tribute as an opportunity to reveal something about his own style through an examination of another’s; Peterson could have done the same, but there’s no other style present. The tunes are Sinatra tunes, the running times are Sinatra running times, sure – but the arrangements, the solos, the group dynamic – it’s all Peterson. The concept is the only place Sinatra appears, and it’s just not enough.

Ultimately, A Jazz Portrait Of Frank Sinatra fails because of its lack of connection. I find it hard to believe that this record was Peterson’s idea. Though he worked well with vocalists (especially Fred Astaire) and had a nuanced idea of the tribute album (as evidenced on his Nat King Cole disc), Sinatra doesn’t seem like Peterson’s musical brother. This jazz portrait is more illustration than art.